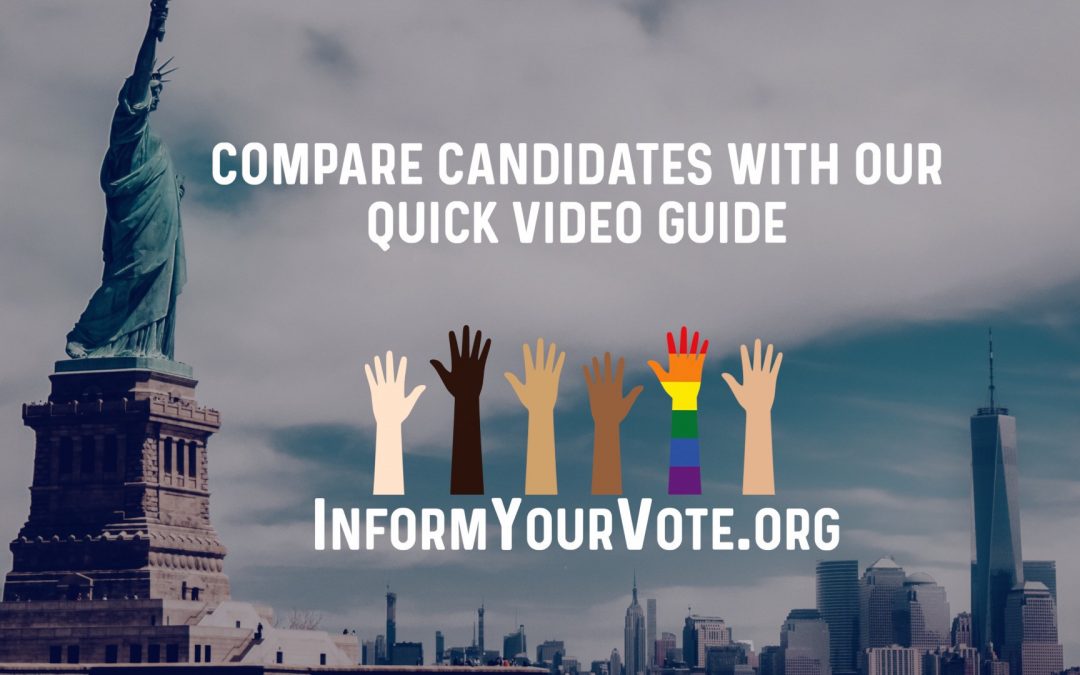 By disrupting a winner-take-all electoral system, ranked choice voting is an important step toward strengthening America’s imperiled democracy. But if it is not accompanied by better-informed citizens, elections will continue to devolve into contests where misinformation, money and celebrity win out over truthfulness, integrity and competence.

The mission of InformYourVote.org  is to facilitate a social media-powered 21st-century fairness doctrine that brings transparency, accountability and integrity to politics.

More than 150,000 New Yorkers informed their votes for the city’s June 22, 2021 Democratic primary voters. This made our democratizing media platform the most widely viewed voter literacy tool for the election.

We achieved our viewership in an unexpected way, with just $9,000 in advertising. In the process, we learned five important lessons and developed what could be a breakthrough model for building a better-informed democracy.

Lesson #1: Meet People Where They Are, Not Where You Want Them to Be.

As a Webby Award-winning media innovator since 1996, I thought I could create a “candidates video debate” destination at InformYourVote.org where New York voters would go to compare short videos of candidates answering the same 14 questions.

The selection of topics were crowdsourced using our innovative Questions That Local Voters Care About survey. To promote the survey and solicit questions from dozens of New York City nonprofits and civic activists, we partnered with the Bella Abzug Leadership Institute, a New York non-profit that I have served on the board of since its founding in 2005.  Hundreds of New Yorkers voted online to select their favorite 10 of 50 questions from the survey.

“Build it and they will come” was my hope. But it didn’t work out that way.  Although we created an enticing, fast-paced 30-second ad and spent $3,000 in advertisng, more than 90% of those who clicked through to our website did not watch a single video there.  At that rate, I would run though my miniscule self-financed $12,000 marketing budget without informing enough New Yorkers to have a measurable impact on democracy.

So I tried something radically different. Instead of expecting New Yorkers to come to our website and sort through candidates’ responses, we would meet viewers where they were, on YouTube, America’s most frequently accessed website.  We marketed each of our 102 short response videos as separate “candidate content ads,” with an equal budget for each candidate.

But when my original plan failed, I gave it a try. Now, one month later, I can happily report that it works.

Lesson #2: Voters want to be informed about candidates, but it has to be made easy for them.

YouTube, owned by Google, provides its advertisers with plenty of data. We geo-targeted New York City viewers for our candidate content ads to appear before videos about news and politics.

After more than 900,000 impressions, our candidate response videos scored an average view rate of 34%. This is about 10% higher than the average YouTube ads, which usually have the added advantage of alluring celebrities and flashy Hollywood grade graphics.

In new media parlance, I had wanted New Yorkers to “lean in” to the InformYourVote.org website to select which questions and which candidate answers they wanted to compare.

But voters couldn’t care less about what I want them to do. When it comes to online behavior, we “vote with our clicks.”  The cost to get a person to click on our Facebook ad for InformYourVote.org and from there to watch one YouTube video was 100 times higher than the cost of getting a person to view the same content as a YouTube ad.

New Yorkers demonstrated that they were indeed interested in hearing candidates express their positions on important issues, but only when they could “lean back,” and watch it more easily-without having to search it out.

Using the same lean in web-strategy that we started with, NYC Votes, an official city’s outreach effort with a $15 million budget to explain ranked choice voting and publicize candidate positions, showcased three minute videos of each mayoral candidate. As of June 15, their YouTube view count of these videos ranged from 200 views for Scott Stringer to 584 for Andrew Yang.

Our ‘lean back’ content ad strategy, however, garnered more views for 90 of InformYourVote.org’s 102 uploaded videos than NYC Votes’ top performing candidate video. Our top viewed videos of Eric Adams and Andrew Yang answering what they would do during their first 100 days in office were viewed more than 12,000 times each. Additionally, every one of the nine leading candidates had at least one video with more than 5,000 views.

Further statistical evidence that citizens are willing to inform their votes, if made easy and accessible, came from our Google search experiment. As an educational non-profit, we qualified for Google’s ads grant program – up to $10,000 per month worth of free search ads. Using terms like “NYC Mayoral Candidates,” the click through rate of our search ads averaged 10.78%, more than triple Google’s average rate of 3.17%.

Lesson #3: Voters want to be fair. The process of informing them about candidates should also be fair.

Reducing the influence that money has on elections is one of the few political objectives that a wide majority of Americans share. That’s because political speech now requires vast sums of money in order to reach voters, further incentivizing these expensively crafted ads to be propaganda-focused while presenting little indication of what a candidate actually stands for.

During the past decade, candidates for the U.S. House of Representatives with the most money won more than 90% of the time. So is it any wonder that what passes for election reporting in many parts of our country is in actuality a scorecard of who has raised the largest “campaign war chest?”

The fairness doctrine was introduced in the mid-20th century with the advent of television. Broadcast licenses came with usage regulations, including the fairness doctrine, which required that political candidates had to be provided “equal time” to present their positions to the public.

Under Ronald Reagan’s presidency, the fairness doctrine regulation was removed and equal time coverage became voluntary. With the popularity of Fox News and celebrity pundits in the late 1990’s, fairness became, to some companies, an obstacle to profits. And with the rise of Internet media, it became obsolete.

To implement our new fairness doctrine for the digital age, we provided each of the nine mayoral candidates with $1,000 worth of YouTube video content ads during the same four week period.

To get the most bang for our limited buck, each day we adjusted the ad buy to promote those videos from each candidate which had the highest view rate. The interest was so strong that most videos cost just one or two cents per view. To put this in perspective, the best politically focused videos from a different but similarly budgeted campaign that I managed last year had a cost per view that was at least five times higher.

New Yorker voters did not simply vote with their clicks to access unbiased candidate information. They also did this in a way that was astonishingly fair to the candidates whom most had never heard of.

The early polls of the mayoral race favored the candidates with name recognition and advertising, especially Andrew Yang. Another mayoral candidate named Art Chang was so little known that most polls refused to include him.  But by providing Chang’s videos with the same $1,000 worth of ads as the other candidates, we were able to measure the influence that name recognition had on the relative level of interest New Yorkers had for each of the candidates.

Our statistics showed that although Chang did not measure 1% in the polls, his videos received a total of more than 25,000 views from 22,000 unique viewers. This was about a thousand more views than either Diane Morales or Shaun Donovan received, although each had spent exponentially more on advertising than Chang. Meanwhile, the total views for Andrew Yang, whom polls have pegged with over 30 times more votes than Chang, had only 17% more viewers than his virtually unknown opponent.

Lesson #4: Social media doesn’t have to undermine democracy. It can help to strengthen it.

The world’s social media giants, Google/YouTube, Facebook and Twitter, are in the spotlight for allowing their powerful social media platforms to be used to spread fake news and violence.

But imagine if these same platforms could be used as vehicles for expanding voter literacy about candidate positions prior to elections.  Imagine if citizens fed up with the influence of money in politics could be the change they want to see by replacing misleading political ads and sharing unfiltered candidate position videos with others in their social and family networks.

Imagine elections in which a transparency-fueled meritocracy of positions, solutions and experience, instead of donor money, won elections. Imagine the accountability that could result by easily accessing and comparing positions that incumbents had made when they were running for office with their actual votes after they got elected.

Imagine the number of women and men with integrity who might run for office if the process wasn’t the soul-sucking, influence-selling, fund-raising enterprise it is today.

Imagine what a government of candidates who won elections in this manner would be capable of delivering to we, the people. And finally, imagine the “more perfect Union” that would result from a galvanized and fair political-social-media.

Lesson #5: Candidate Content Ads is a Democracy-Enhancing Idea Whose Time Has Come.

There is nothing about our success in educating New York voters through candidate content ads that could not immediately be applied, cheaply and efficiently, to elections everywhere.  If we simply doubled our New York experiment’s per candidate spending for candidate content ads and targeted it to a congressional district, it would cost just $30,000 or so to replicate what we have done. Multiply this by every Democratic and Republican Party primary and general election, in every one of America’s 435 congressional districts and 50 states, and the total cost would be at most $50 million every two years. That’s less than 1% of what will be spent on propaganda-focused campaign ads during the 2022 midterm election.

Although it seems counterintuitive to promote candidate content as advertising, think of the system we have now. More than $8 billion, most of it from favor-seeking donors, was spent during 2020 congressional elections. Nearly all of it went to buy short campaign ads that were, at best, simplistic, and often, nasty and deceitful.

These ad campaigns are largely financed by an influence-seeking donors.  Their billions go to flooding the media during the weeks prior to elections with propaganda that, for the majority of American voters, is all the political education they are likely to get.

Despite 50 years of attempts at campaign finance reform, the real dollar spending and influence of money on politics is far greater than it ever was.

The InformYourVote.org approach provides an alternative that requires no new laws. With a relatively tiny amount of money, this can be done for the critical 2022 and 2024 elections.

For American democracy to survive the onslaught of fake news and an increasingly misinformed electorate, we are going to need to find a better and fairer way forward. That’s why InformYourVote.org’s solution is a democracy-enhancing idea whose time has come. 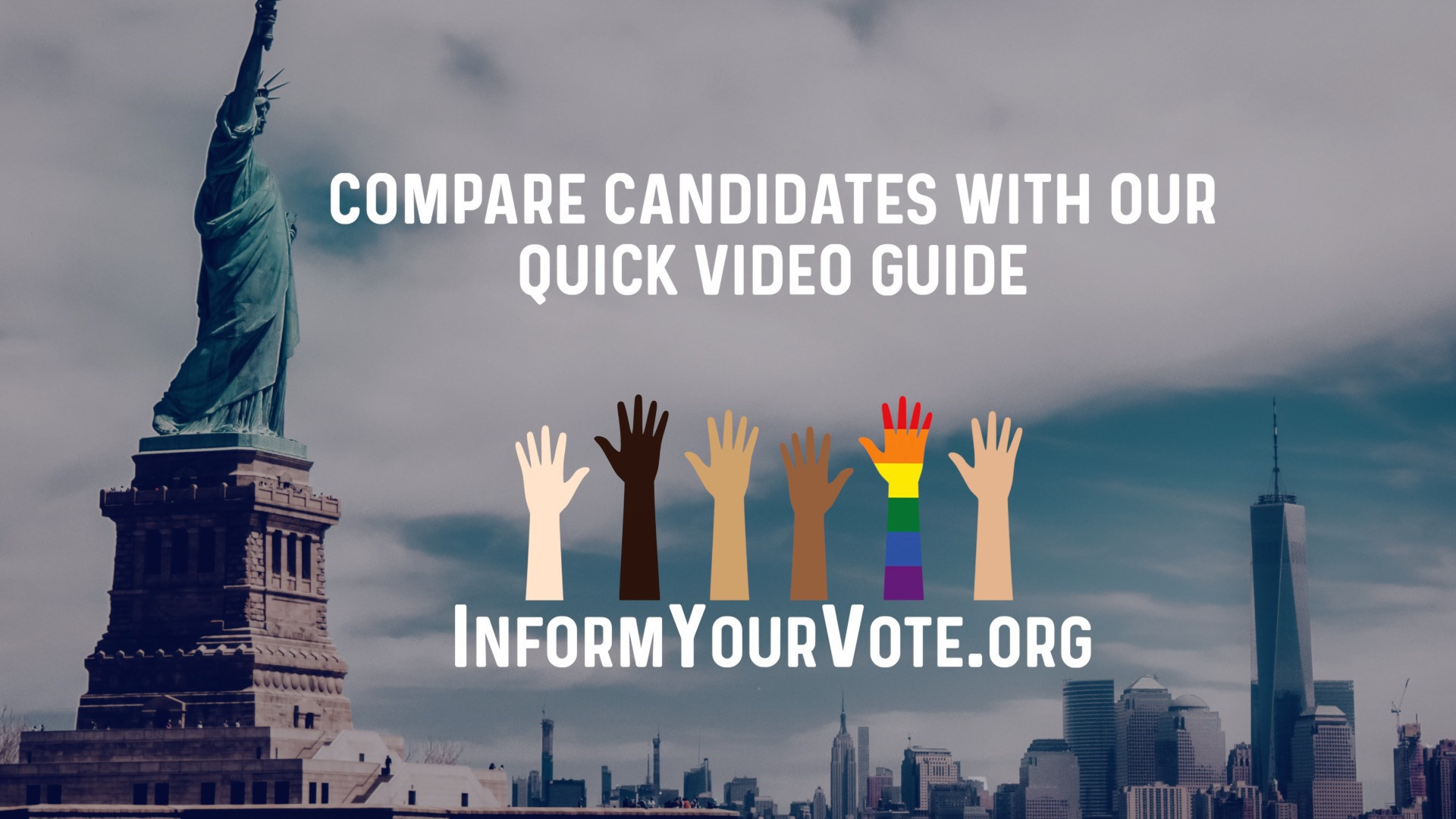